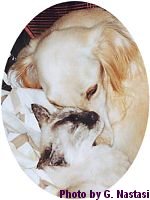 Do animals have feelings? Do they experience joy, love, grief, fear?

Those of us who have shared our lives with animals, if our eyes are open and our hearts honest, will say, “Yes”. The purr of a cat, the wag of a dog’s tail are, of course, instinctual behaviors based on physical comfort levels and social responses. However, if we are even remotely open to receiving the heart-to-heart communication we share with our animal companions, we believe that these instincts go hand in hand with happiness, contentment, and feelings of safety and (yes, even) love.

Still, there are those who argue that animals have no emotions, that they simply exhibit instinct-driven autonomic responses to stimuli. Extensive scientific research into neurobiology and social structure among animals, which has been ongoing now for decades, disagrees. It’s no longer just a matter of feel-good opinion that animals do experience many of the emotions humans do. Yes, they experience those emotions in their own way, which is absolutely key to understanding our co-travelers of other species. However, they do experience them. Modern neuroscience has known for a long time now that specific areas of the brain (notably, the limbic system, located in the temporal lobe) control, filter, and respond to emotions. Many studies have proven that other mammals and birds (some research has shown analogies in certain fish and even octopuses), have these same areas of the brain, and they emit identical responses, in regards to emotions, as our human brains do.

If the animals have the same or analogous neurological structures, which respond in the same way, it would be denying the scientific evidence of the modern age to try to claim that our dogs, cats, horses, and birds don’t have feelings.

But don’t take my word for it. I’m just a crazy old woman who talks to animals. Here is the opinion of some of the world’s top experts on the subject:

“…people don’t have a monopoly on emotion; rather, despair, joy and love are ancient, elemental responses that have helped all sorts of creatures survive and thrive in the natural world. […] This doesn’t imply that animals think about their feelings like people do,” said Panksepp, “but they do experience them in similar ways.” [Jaak Panksepp, a professor and researcher at Washington State University]

On July 7th, 2012, at the Francis Crick Memorial Conference at the University of Cambridge, a gathering of many of the era’s top scientists signed a document officially declaring non-human animals sentient. This document, called the Cambridge Declaration on Consciousness, states in part:

“The neural substrates of emotions do not appear to be confined to cortical structures. In fact, subcortical neural networks aroused during affective states in humans are also critically important for generating emotional behaviors in animals. Artificial arousal of the same brain regions generates corresponding behavior and feeling states in both humans and non-human animals.”

“Furthermore, neural circuits supporting behavioral/electrophysiological states of attentiveness, sleep and decision making appear to have arisen in evolution as early as the invertebrate radiation, being evident in insects and cephalopod mollusks (e.g., octopus).”

http://fcmconference.org/#program
Footnote from the document: *The Cambridge Declaration on Consciousness was written by Philip Low and edited by Jaak Panksepp, Diana Reiss, David Edelman, Bruno Van Swinderen, Philip Low and Christof Koch. The Declaration was publicly proclaimed in Cambridge, UK, on July 7, 2012, at the Francis Crick Memorial Conference on Consciousness in Human and non-Human Animals, at Churchill College, University of Cambridge, by Low, Edelman and Koch. The Declaration was signed by the conference participants that very evening, in the presence of Stephen Hawking, in the Balfour Room at the Hotel du Vin in Cambridge, UK. The signing ceremony was memorialized by CBS 60 Minutes.

The full text of the Declaration can be found here:

If would like to support a not-for-profit organization that does a great deal to help animals, please consider making a donation to New York Wildlife Rescue/Northeast Llama Rescue. Wes Laraway and his family and volunteers help hundreds of animals every year, with no funding except your donations and what comes out of their own pockets. You can support their efforts by visiting their website and clicking the “Donate” button. You can also look at their “Other Ways To Help” page (found under several of the top level drop-down menus) for more ideas. They can’t do it without the support of friends like you!

This site uses Akismet to reduce spam. Learn how your comment data is processed.